Get to know Ekaterinburg better! 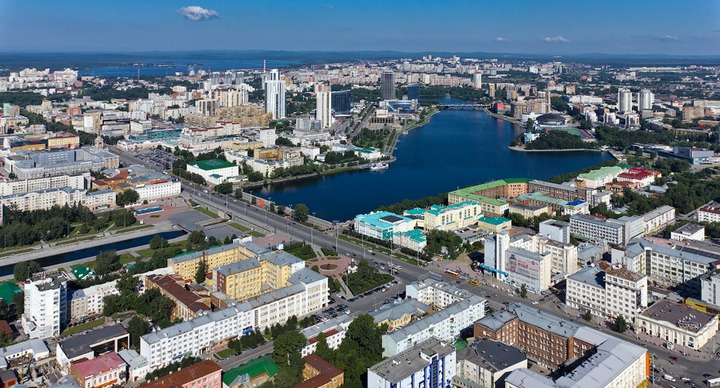 The large body of water in the center of Ekaterinburg is frequently called a lake by visitors, but in fact it’s an artificially created City Pond. The pond and the dam once fed the mills for the iron works, which originally gave birth to the city.

How does the pond relate to the iron works and metal production? To produce iron in the 18th century, one had to use the energy of falling water to make the heavy hammers work through a sophisticated system of water-wheels. The steam power was introduced only at the end of 18th century!

While European factories usually used water channels to power iron works, the Ural factories used the dam and the pond instead to create an artificial waterfall. For this reason, the factory pond sits in the heart of almost any Ural town, but you won’t find it in other parts of Russia. A dam and a pond in the heart of the city is a typical feature for towns in the Ural region.

The Ekaterinburg iron works were constructed in 1723, part of an effort to develop industry, and were implemented at the will of the ambitious emperor, Peter the Great. The dam blocked the flow of the Iset river, and an artificial waterfall was constructed. As a point of information, the central parts of the dam are made of granite and larch wood, which is now three-hundred-years old!

European specialists played a vital role. They brought technology, experience, and skills to create a modern industry in the Urals. The construction of Ekaterinburg — the factory and the city — was supervised by Willem de Gennin, an experienced German mining engineer. He created a factory-fortress, which was radically different from the typical Russian town.

Usually, Russian settlements functioned as a trading and administrative center, with streets running circles around the market square. In contrast, Ekaterinburg was constructed in accordance with European principles of urban architecture, which in turn followed patterns of Roman town planning, based on a scheme of a Roman military camp with its strict structure of perpendicularly crossing streets. And instead of a market square, the factory served as the centerpiece of the urban space.

The very name of the new town, Ekaterinburg, pays homage to Peter’s interest in European fashion. The name is German and literally means ‘City of Catherine’, in honor of Empress Catherine, Peter’s wife, reflecting the same naming practice as Saint-Petersburg.

The development of new technologies in metallurgy led to the decline of Ural water-powered factories in the 19th century. Already in 1808 the Ekaterinburg iron works were shut down and replaced by a mint and small mechanical factory. Still, Ekaterinburg retained importance as an administrative center, supervising the mining industry in the vast Ural region.

In the 20th century the Historical Square, Plotinka, was built in place of the former factory, incorporating remnants of the city’s industrial heritage into the public space. An old factory watering tower, built of stone and wood, overlooks the square and is widely regarded as one of the symbols of Ekaterinburg.