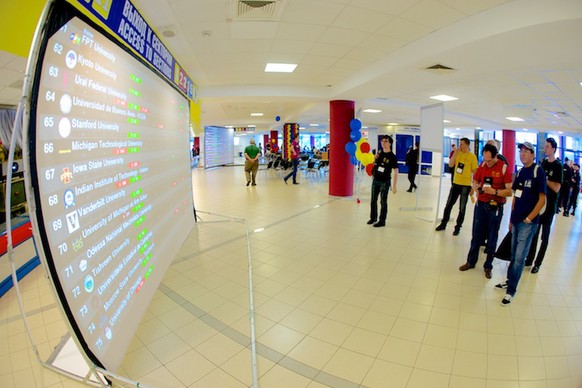 ACM ICPC 2014 results table has been frozen. We can know who else solved the problems and moved to the top during the last hour only by teams’ reaction to proper solutions.

Before “freezing” of results Moscow State University was the leader. By this time MSU has solved 6 problems out of 12 and the team has left behind the nearest opponent by two problems. According to reaction of the team in the last hour they submitted one more problem. By 14:00 Top-5 has included MSU, SpbSU, NRU Higher School of Economics, Tsinghua University (China), Comenius University (Slovakia). Full results table is available at the official web site. Slovakia surprisingly has joined the traditional  standing of Russia and China. We`ll see, if it stays in top five teams till the end of the contest.

ITMO, last year’s winners, rate 14th at the moment. Gennadiy Korotkevich, Champion of ACM ICPC 2013, came this year as a guest to cheer for his team and solves the problems at  icpc.kattis.com at the same time as official participants.

Borja Sotomayor, coach of Chicago University team, wrote in his micro-blog that problems of the Finals seem much more difficult this year compared to the last year.

Little time is left before we`ll know the contestant`s impressions.